Seven research chairs have been created yet at the École normale supérieure. With the perspectives of partnerships and funding, around twenty chairs could be created in the coming years

The ENS hosts 2 kinds of chairs: the chairs established at the ENS, with a chair holder recruited according to a recruitment process identical to the one for recruiting professors, and chairs whose holder has been selected by a foundation, while the ENS supervised the process. Indeed, some chairs deal with subjects interesting some ENS researchers, while some other chairs deal with external research programmes implying some partners.

These chairs are approved by the Scientific board of the ENS and benefit from a real independence, which implies freedom in the scientific approach of the treated subjects, liberty of results dissemination and a thorough evaluation that is subject to a report to the Scientific board and the involved partners. 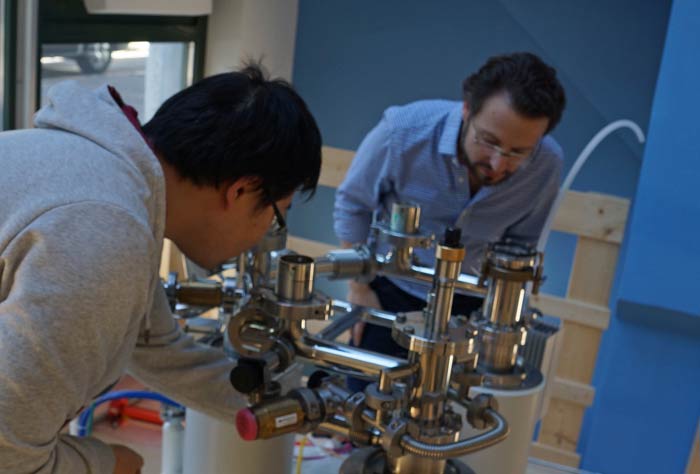 Chair held by Olivier Christin, Director of studies at the École Pratique des Hautes Études, professor at the University of Neuchâtel.

The CEDRE Chair, created by PSL and hosted at the ENS (on the Jourdan campus), aims at leading, supporting and coordinating research on the theories of Republic, history of ideas and republican doctrines, the political practices specific to republican systems, history of republican political experiences, in a long-term and international perspective.

For Olivier Christin, Director of the Chair, the objective of this Chair is to “rediscover the significance and topicality of the republican ideals, and see how they look to the future of our political systems; identify the issues of these political, social and ethical aspirations and understand their expression in France and abroad; restore their meaning to words and ideas we meet every day and talk about the issues that concern us all, such as public interest, the citizens’ commitment and involvement in the functioning of institutions, the construction of a fair society, in which inequality should not hinder the freedom everybody should equally enjoy.”

CEDRE Press release
Read the speeches for the CEDRE inauguration, November 24 and 25 2016
Energy and Prosperity Chair

The Energy and Prosperity Chair was created in 2015 by Gaël Giraud and Jean-Pierre Ponssard, to inform decisions of public and private actors in managing the energy transition, which is a major issue for the 21st century.

The purpose of this Chair is to lead collaborative academic research in order to bring powerful insights on innovative funding schemes dedicated to the energy transition (financial engineering and regulatory issues) as well as to provide relevant tools to assess associated performances.

In 2016, thanks to the patronage of MHI France, the Fondation de l’École normale supérieure has recruited two world-renowned scientists on two ENS-MHIF chairs: Dimitry Chelkak in mathematics (analysis, probabilities and dynamic systems) and Vyacheslav Rychkov in physics (High-energy physics)

Appointed September 2016 by the Scientific board of the ENS for a five-year term, these two researchers are acknowledged as world-class researchers.

Dimitry Chelkak (analysis, probabilities and dynamic systems): born in 1970, comes from the St-Petersburg Steklov Institute. He has received in 2014 the Raphaël Salem prize. He works at the interface of mathematics and physics, in particular on the conformal invariance of the Ising model, with several co-workers such as Stanislav Smirnov (2010 Fields medal).

Vyacheslav Rychkov (High-energy physics): born in 1975, he is a teacher-researcher at the UPMC and at the CERN. He has received in 2014 the New Horizons in Physics Prize for his works on conformal bootstraps. This prize is awarded each year to promising young researchers who have already produced decisive and unexpected works.

Thanks to these two chairs, both ENS and MHIF wish to combine research activities at the highest level and dissemination of knowledge towards students. MHIF is a world-class company which develops high technology activities in particular in areas like energy, aircraft, spatial sector. It has to face difficult issues in mathematics and in physics. MHIF wants to contribute to the development of theoretical foundations of both mathematics and physics and accordingly start a scientific partnership with the ENS.

Chair of Geopolitics of risk

Chair held by Professor J.Peter Burgess and created in 2016.

This chair is the result of a partnership with the Axa Research Fund, which partly funds it by subsidising it for 10 years. The Chair has also been approved by the Scientific board of the ENS, and is held by Professor J.Peter Burgess, a philosopher and specialist in political science and geopolitics.

This Chair aims at fundamentally renewing an issue that is now more crucial than ever: the risk issue. Prof. Burgess believes that traditional approaches to risk analysis overlook fundamental aspects of what it means to be human in the face of uncertainty. “My hypothesis is that risk needs to be seen as more of a cultural, social and even moral matter,” Prof. J. Peter Burgess explains.
https://www.axa-research.org/en/projects/peter-burgess

Find the first conference of the Chair of Geopolitics of risk on Savoirs-ENS website:

An issue of modern society lies in modelling complex systems including a huge amount of non-homogenous variables (thousands or millions of variables). Turbulent flows, predictive maintenance of larger systems, picture classification, genetics as well as social networks analysis are some typical examples.

The first original research line for this chair is to closely connect complex systems models, developed in each discipline,  with mathematical models coming from data analysis. The ENS-CFM Modèles et Sciences des Données Chair is thus a multidisciplinary chair, operated collaboratively by the departments of biology, economics, computer science, geophysics, mathematics, physics, cognitive sciences, as well as some departments in humanities and social sciences.

The second research line aims at a detailed understanding of the algorithms used in data science. Given the huge impact of these algorithms on the entire range of sciences, the economic world and, more broadly, on society as a whole, it is fundamental to understand and control them.

The Modèles et Sciences des Données Chair give thus the opportunity for an interdisciplinary approach of these issues, through various actions, such as organising a data challenge, recruiting post-doctoral researchers, inviting foreign professors, and launching training actions.

The MOM Chair has been created by PSL Research University at the ENS in February 2016, for an initial period of 3 years, and financed by the French Ministry of Higher education and Research and the Ministry of Interior. This chair is directed by Professor Gilles Kepel, university professor in political science, Arabist, author of around fifteen books on the contemporary Middle East and on Islam in France.

The MOM Chair aims at restructuring the field of Middle East and Mediterranean studies, in diachronic and synchronic perspectives.

On September 2016, the first Ph.D. students associated with this chair have joined the ENS/PSL doctoral school. A new master programme, specialised and cross-disciplinary to all the fields taught at PSL, focuses on “the Middle East and the Mediterranean Sea” and should be submitted to the approval of the Ministry of Higher education, with a launch date on September 2017.