The prestigious distinction was awarded to them during a ceremony that took place on October 01, 2021 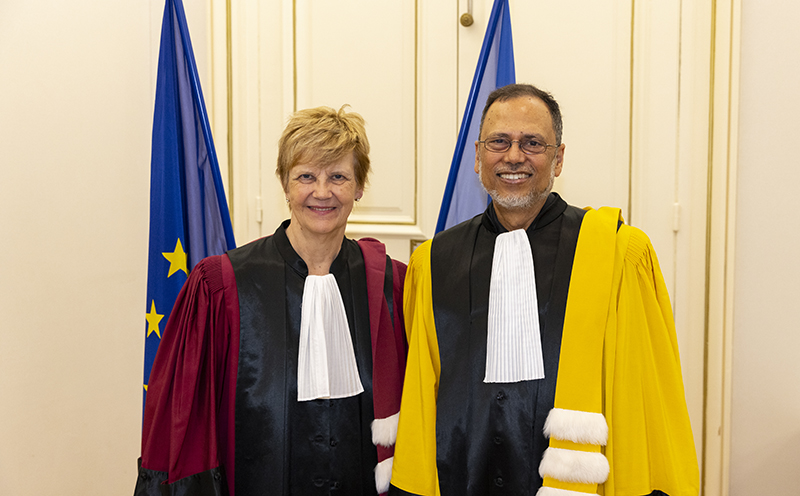 During the ceremony, her work was introduced by Franck Ramus, Research Supervisor at CNRS and member of ENS Department of Cognitive Studies.

Dorothy Bishop is Professor of Developmental Neuropsychology at the University of Oxford, and Principal Research Fellow of the Wellcome Trust. Among other distinction, she is a Fellow of the Royal Society, the British Academy, and the Academy of Medical Sciences in the UK, which reflects the multidisciplinary nature of her work.
Her research focuses on children's cognitive development, with a particular emphasis on children’s communicative disorders, which include language impairments, autism and dyslexia, and that she tackles by mobilizing psychology, linguistics, neuroscience and genetics. Beyond her fundamental research, Dorothy Bishop is also concerned with the clinical applications of her work, which is how she got to develop diagnostic tests for language impairments. Her Test for Reception of Grammar (TROG) has been translated into numerous languages and is one of the most widely utilized by speech therapists worldwide.
Finally, Dorothy Bishop is very involved in scientific outreach and Metascience, especially through her blog and via Twitter. She is one of the pioneers of the Open Science Movement, and she has exposed several major cases of scientific fraud or malpractice.

During the ceremony, his work was introduced by historian François Hartog, Emeritus Professor at EHESS and President of the executive board of ENS.

Visiting professor at ENS, Dipesh Chakrabarty is a historian specialized in postcolonial studies and global history (Lawrence A. Kimpton Distinguished Service Professor of History, South Asian Languages and Civilizations, and the College). He is also Director of the University of Chicago Center in New Delhi and a fellow of the Chicago Center for Contemporary Theory.
A founding member of the Subaltern Studies Collective, he also seats at the editorial board of the journal Critical Inquiry. He has received several major international awards and is a Honoris Causa doctor of the Universities of London and Antwerp.
His major publications, translated in numerous languages, include:
- Rethinking Working-Class History : Bengal 1890-1940, Princeton 2000
- Provincializing Europe : Postcolonial Thought and Historical Difference, Princeton 2008.
- The Calling of History : Sir Jadunah Sarkar and His Empire of Truth, Chicago 2015.
- The Climate of History in a Planetary Age, Chicago 2021.