An interview with historian Dipesh Chakrabarty, who has been awarded an Honoris Causa doctorate by ENS

Professor Dipesh Chakrabarty of the University of Chicago has been awarded an Honoris Causa doctorate by ENS for his work as a historian, specializing in South Asian civilization and post-colonial studies, climate change and globalization. A visiting professor at ENS, he took time out during his latest stay in Paris to talk about his work, the French influences on his student politics and how an Australian bushfire changed his academic career. 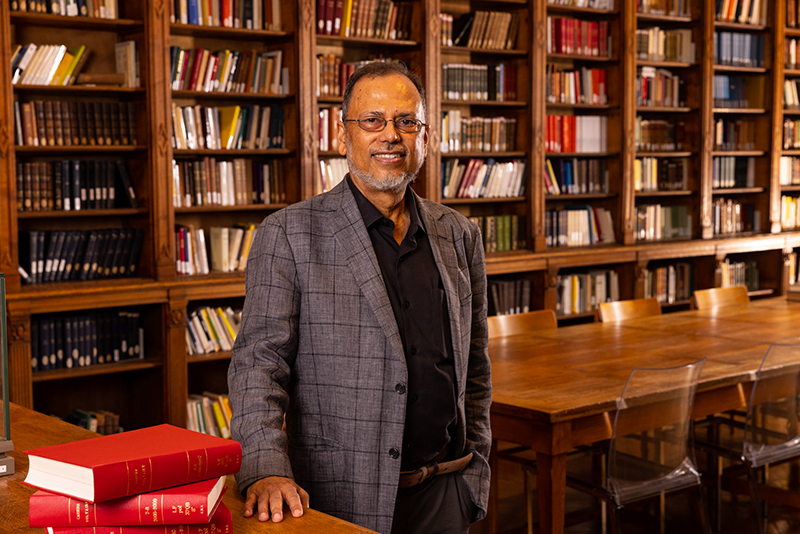 The career paths of most academics involve a devotion to the study and teaching of a single intellectual field, in the same country and same language, with a limited amount of professional travel for international conferences and lectures.
And then there are people like Professor Dipesh Chakrabarty.

A recipient of several major academic honors, his career has involved teaching positions in his native India, Australia and the United States, along with visiting lectureships in the UK, Canada, Germany, Austria, Spain, the Netherlands and, of course, France, with two spells at ENS. The latter of those was for an Honoris Causa doctorate, recognizing his work in the fields of history, the philosophical anthropology of history, and most recently, our perceptions of globalization and planetary change.

“I’m a global citizen in a global village,” he says of his peripatetic career. “But I have very deep roots in Bengal. My first language is Bengali and my first love in my school years was Bengali poetry. So, I see myself more as a layered human being, like an archaeological structure.” The foundations of that structure are a physics degree from the University of Calcutta, followed by an MBA-equivalent diploma from the Indian Institute of Management in Calcutta in 1971. His switch from physics to business was prompted by the turbulence of left-wing student politics in India at the time. “I confessed to my friends that I didn’t have the courage to spread Maoism in the villages and start a revolution – I was too scared of police beatings and torture -- and I lost all my friends overnight. So, out of sadness and some sense of self-disgust, I decided to make money in this world and joined a business school.”

A new subject, a new life

The friendship with money did not last long. After completing his MBA and taking a job, he was lured away by his former history teacher on the program, Prof. Barun De. Handing him a copy of EP Thompson’s “The Making of the English Working Class”, the professor suggested he write a similar book about India, adding what proved to be a life-changing question: ‘Would you rather be a historian or a manager?’

Prof. Chakrabarty promptly quit his job and began to research. Without a formal qualification in history, no Indian university would take him. However, a visit to Calcutta by Prof. Donald Anthony Low of the Australian National University in Canberra later led to an offer of a PhD position there, with half a dozen articles written for academic journals being sufficient for entry.

Prof. Chakrabarty went on to spend nearly 20 years in Australia, continuing his work on southern Asia and notably, the new field of Subaltern Studies, which looked at those considered to be subordinate – such as workers and peasants – as agents of their own history. His growing reputation led in 1995 to a post at the University of Chicago, where he has worked ever since in various roles, albeit maintaining his links with India and Australia.

The Australian connection would go on to provide another turning point in his career in 2003. Having fallen in love with Canberra’s parks, greenery and surrounding countryside – “in Calcutta, nature was in books and on the screen, or outside the city” – he later returned to one of his favorite spots, Ginninderra Falls. The visit came shortly after devastating bushfires in the region had killed four people, injured nearly 500 and destroyed 470 homes – while laying waste to any wildlife or flora in its path.

The impact of climate change

“The scene was like something out of the movie Mad Max: burnt cars, burnt trees, all the grass was yellow… and people were scared,” he recalls. “It was the first time I had seen people in a rich, white country being scared. So, I asked fellow academics what had happened, and they said ‘This is not normal drought and these are not normal bushfires: this is climate change. Until then, I’d barely heard those two words. But I soon started reading.”

The books proved more than just informative; they questioned the way he had seen the processes of globalization. “The proposition that blew my mind was that human beings -- with their numbers, technologies, cities and consumption -- were acting like a huge geological force on the planet. Our impact in terms of species extinction was like the asteroid strike that killed off the dinosaurs. It was so different to the history I’d been doing, which was about giving agency to ordinary human being and seeing the peasant or ordinary working person as the hero. Suddenly, humans, considered collectively, looked like agents of destruction.”

His thinking was distilled in the form of a magazine article written in 2007 in Bengali. Is history about the little people? Or is it about the big issues being raised by fossil fuel consumption – which, lest we forget, gives us the electricity needed to exercise our freedoms? Carefully argued and meticulously researched though it was, it sank without trace. His Bengali readers were not interested then in the issue of climate change and its possible implication for the writing of history. Two years later, though, when colleagues running the journal Critical Inquiry were short of material, Prof. Chakrabarty worked up his Bengali article into an article in English. Without realizing it, he had lit a blue touch paper, and the firework duly exploded on the political left.

“People were attacking me for not being Marxist enough, for not blaming capitalism enough, or they were asking why I was blaming humanity,” he says. “All sharp criticism hurts you. Who wants to be told they’re wrong or they’ve done something morally culpable? But even if it hurts and makes you bleed a bit, ultimately, you’re grateful that someone has criticized you, because it makes you try to sharpen your exposition and to clarify.”

Translated into several languages and still one of the journal’s most downloaded papers, the article’s reception prompted Prof. Chakrabarty to set the record straight. The result is his latest recent book, ‘The Climate of History in a Planetary Age’, where he argues that human history should now be seen from two different – albeit interconnected – perspectives. “There’s what I call a global perspective, which is essentially a human-centric story of capitalism, empires, technology, and how the global village came about. And then there’s a planetary perspective, where humans are decentralized, which is about our impact on the processes of geology, biology and the evolution of life, in other words, the deep history of the planet that we usually take for granted.” 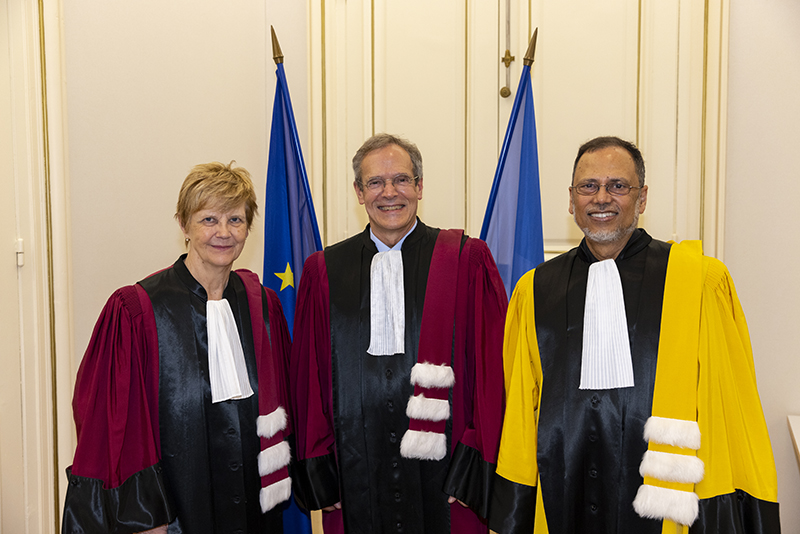 Dipesh Chakrabarty and neuropsychologist Dorothy Bishop receive their Honoris causa doctorates at a ceremony with Marc Mézard, Head of ENS.

He offers a simple, yet vivid example, of how the two perspectives are laid bare in the public discourse about climate change. “Fossil fuel is perfectly renewable – but you have to wait 300 million years. It’s non-renewable in human time, and we only think in terms of human, rather than geological, time.” While the book does not offer solutions to the climate crisis – “I know there is a storm, but I can’t be both part of the storm and think” -- Prof. Chakrabarty sees the need for humans to scale back their demands on the planet and its biosphere. This applies to our use of natural resources, for example, and is already happening in population terms with a widespread fall in fertility.

From Subaltern Studies to climate change and the nature of the modern human condition, Prof. Chakrabarty is no stranger to new ideas and perspectives – or to ENS. A visiting professor here in 2019, he described that moment as “a pilgrimage, because when I became a Maoist in the 1960s in Calcutta, one person who influenced our theoretical discussions was Louis Althusser, a professor of ENS.” However, the Honoris Causa award has meant an even more emotional return. “I look at the courtyard and I see all the sculptures, and I’m reminded of how many great people have been here as students and teachers,” he says. “It’s a bit of a Holy Land, to use a religious metaphor. It’s a tremendous honor to be part of an institution that I have always honored in my heart.”