Won a gold medal in the International Mathematical Olympiades? Apply to the Fields Medal « Nursery » Scholarship at Louis le Grand and ENS.

The Ecole Normale Supérieure (ENS) and Lycée Louis Le Grand (LLG) have set up a partnership for the recruitment of laureates of the International Mathematical Olympiads.

The Ecole Normale Supérieure (ENS) is currently recruiting one to two gold medalist winners of the International Mathematical Olympiads for an integrated ENS-Louis le Grand (LLG) five year program. These students will start their higher education with the status of ENS-LLG scholars during their first two foundation years (freshman and sophomore years). They will follow an intensive special program at LLG (Lycée Louis le Grand, Paris, France) with an emphasis on mathematics and, if needed, intensive French courses. Moreover, they will receive a mentor from the Mathematics department of ENS.

As long as the students reach the level of excellence expected at LLG, after two years they will become ENS students (normaliens). The ENS-LLG laureates will obtain  a scholaship of 1000 € per month during five years. For accommodation, ENS will offer lodging at a good market price in Paris or in the Parisian suburbs. 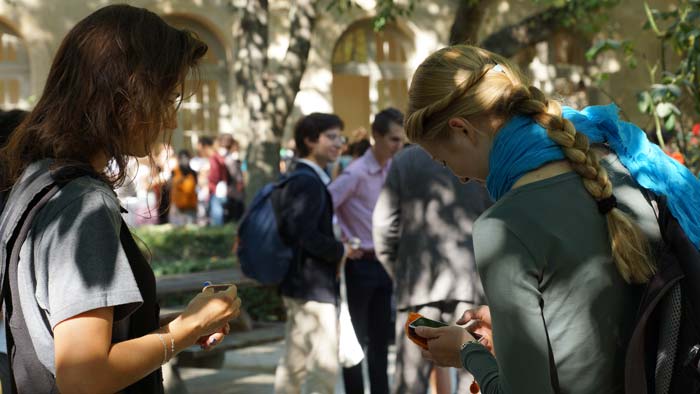 How to apply to the Olympiad program

One to two candidates will be selected amongst the Gold Medal Laureates of the Mathematics Olympiads starting in the summer of 2019.

If you are on an Olympiad team and you are interested in this scholarship, please fill out the form below:

Link to the application form.

The Department of Mathematics and Apple Mathematics at Ecole Normale Supérieure is both a teaching department and a research laboratory of the CNRS (mixed unit of research number 8553). The DMA fulfills two missions:

Louis-le-Grand is a public secondary school comprising two distinct sections: a traditional Lycée (800 pupils) and Classes Préparatoires (900 students). The latter prepare candidates over the course of two years for entry to the country’s top centers of higher education.
Founded in 1563, Louis-le-Grand is located in the heart of Paris’s Latin Quarter.