Equality and Diversity in academia: An agenda for change

A conversation with Tahnée and Elenora, two young scientists and promoters of equality and diversity in academia

As a campaign to promote Equality and Diversity gains momentum in several ENS departments, its supporters are organizing an online screening in April of the ground-breaking film ‘Picture a Scientist.’ Open to all students and faculty, it will be followed by a panel discussion with guests including Marc Mézard, Director of ENS-PSL. In the meantime, two of the campaign’s supporters, post-docs Tahnée Engelen and Elenora van Rijsingen, discuss their personal experiences as women scientists -- and their agenda for change. 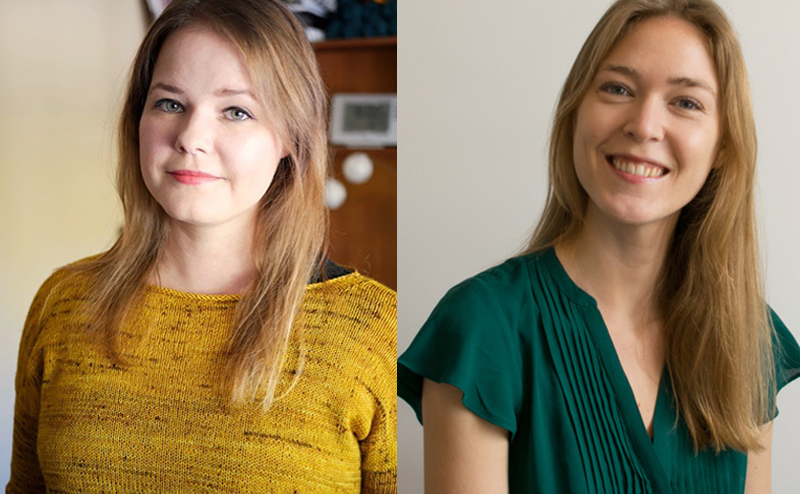 What do you hope the film will achieve?
Tahnée Engelen: In the short term, I hope it will have an eye-opening effect, and that people will realize there are initiatives to try and do something about these issues. They might become interested, get involved and attend future events, as there are departments and teams where this discussion about equality and diversity is not very alive yet. So, I hope this event will light a fire, and spur some action in the ENS community.

Elenora van Rijsingen: Some people won’t be aware of what’s happening and the film does a good job of drawing attention to severe cases of harassment, bullying and racism, but also to discrimination that is harder to see. Watching the film will not solve these issues. But in the longer term, it can plant a seed in people’s minds, especially if they keep being reminded of the issues, which is why we need to organize events at a departmental and institutional level, but also in large international conferences.

What are the film’s main messages?
TE: The message for women is that if you have experienced any of this, however big or small, you are not alone, and you should not feel ashamed or embarrassed. And you can take action. People might think it’s a depressing film, because so many horrendous things are highlighted and so many hurdles need to be overcome to succeed in academia. But it’s also a film with a message of hope, because it shows women coming together and creating a lot of change, even though we have a long way to go.

EVR: Even if they haven’t experienced or witnessed discrimination themselves, people will understand that this is a systemic problem and that everyone has a role to play. We need allies, and if it encourages people to take action, however small, it would be great. Hopefully it will start conversations among students at ENS, and maybe they will share experiences or even report something, as they now realize they’re not the only one. It might also make men more aware of how a lot of their behavior affects women.

What have been your personal experiences of equality and diversity issues?
TE: Representation is very important to me and I remember attending a conference on brain stimulation during my PhD, where almost all the speakers were men, because women in this field hadn’t been invited to give the important talks. It felt very wrong, and gave me a strong feeling this was a ‘boy’s club’, and that maybe I should change my field, as it was so intimidating. It was a horrible message to get, even though it was probably unintentional. But afterwards, a group of women scientists who felt the same way as me started a repository called Women in Brain Stimulation so that conference organizers could find women scientists in the field -- and this doesn’t need to happen again. It was a negative experience, but it led to a solution, which was a big moment for me.

EVR: I’m only realizing now just how wrong some of the experiences I’ve had actually were, from inappropriate comments to real harassment. It doesn’t just happen with #MeToo in the film industry, it happens in academia as well, like at scientific conferences and in the field. Inappropriate comments of a sexual nature at conferences make you think ‘Why do you think you have the right to talk to me like that?’ and ‘Why aren’t you talking to me about my science?

How should women respond to situations like these?
EVR: Of course, you can report harassment. But filing a complaint is a very difficult process and very often not transparent. There are many barriers and there is a lot of work to be done by institutions to make this much easier. Also, the first thing you think is ‘This didn't happen.’ You just put it out of your mind and pretend it never happened. I experienced harassment at a conference five years ago, but could only start talking about it two years ago.
There’s also a power structure at universities where the men at the top - who bring in a lot of research money - think they can do whatever they want. And if you’re just a PhD student, they can destroy you. So, of course, the possible consequences of complaining about them plays on your mind. It’s very frustrating, and it makes me very angry that institutions are not doing enough on this.

TE: I’ve been talked over, or had someone mansplain my own results to me at a conference, which is incredibly frustrating. So, it often feels there is a bias against me. But then there is also a lot of self-doubt, and I wonder whether I’m being over-sensitive in responding that way, and that maybe the guy is just trying to be incredibly helpful. But along with the mansplaining, there is also a lot of unseen bias too. For example, papers led by women tend to get fewer citations, even though they are relevant, and publishing with other women is a double-strike against you.

How much does ‘imposter syndrome’ affect women in science?
TE: It’s a huge problem in academia for men and women. But, for a woman, if you get all these subtle signals that maybe you’re not good enough, or that your male colleague knows better, it exacerbates that feeling. I’m in favor of quotas and positions that are only open to women or minorities. But they can also make that feeling worse, as some people will say you only got a position because you are a woman – and if had you competed with an ‘actual scientist’, maybe you wouldn't have the job. And you may even tell yourself that… So, quotas can actually feed into imposter syndrome.

How did your campaign to address these issues start?
EVR: It began with a screening of ‘Picture a Scientist’ last autumn which created interest in several departments and made us realize we would be much stronger together – as we are all dealing with similar problems. Right now, we would like every department at ENS to have an Equality & Diversity committee or working group, and for these to work together. For example, the Cognitive Sciences department (DEC) has drafted a Code of Conduct, but it would be great to have a code for ENS as a whole. It would also be good to have a policy - and infrastructure – that made it easy to ask for help or to report something, as this could certainly be improved.

So, at ENS how do local Equality and Diversity Committees operate?
TE: At DEC, there are five of us on the committee, which I’m chairing, with three faculty members, one PhD student, and I’m a post-doc. We began by setting up a mentoring program for PhDs and post-docs, which was successful, and has now been taken over by the department. We also organize events, like talks focused on raising awareness of issues or that offer practical advice on how to play your part. And then we work on more institutional topics, like the Code of Conduct. That’s a small step, but I think it's very important for the university to be visible in saying ‘We stand for equality, we do not stand for discrimination.’

EVR: In Geosciences, we recently formed a working group with about a dozen faculty members and PhD students, and sent a questionnaire to the department to understand if people have experienced or are aware of any inappropriate behavior. The survey results are now coming in and it’s clear there is certainly some work to do, so we will write a report on this. We’re also going to put up posters that raise various issues with a powerful image of an iceberg, which is also in the film, about how inappropriate behavior is visible, but that much more lies beneath the surface. We also want to address mental health issues and, more generally, to host seminars and discussions.

Moving beyond ENS, how can more girls be brought into science?
EVR: I think that role models are everything. You need to see yourself reflected in the layers above, so that you feel like you belong. When I got my female PhD advisor, I realized how much I liked being guided by a woman. So now, I actively look for role models for myself, and I also do a lot of outreach activities where I talk about my work. What’s powerful about those events is that when you talk passionately about your research, the girls are so inspired. They want to know how to become a scientist, and you see the effect of being a role model in a very direct way.

And how can more women academics move into the top positions?
TE: There is clearly a leaky pipeline, but there’s no one cause. It’s a lot of small biases: less grant success, less start-up money, fewer jobs, harsher evaluations of CVs, and fewer invitations to speak at conferences. So, action is needed at three levels: individual, institutional and organizational. We’re starting at the individual level, which is raising awareness, and we’re trying to do things at the institutional level, where we could also think about training people in hiring positions to overcome biases. At an organizational level, we could be making daycare available at conferences, so that women with children can attend. There’s no one easy answer. We just need to push for a lot of small changes, and that will make the difference in the long run.

About ‘Picture a Scientist’

‘Picture a Scientist’ chronicles the groundswell of researchers who are writing a new chapter for women scientists. Biologist Nancy Hopkins, chemist Raychelle Burks, and geologist Jane Willenbring lead viewers on a journey deep into their own experiences in the sciences, ranging from brutal harassment to years of subtle slights. Along the way, from cramped laboratories to spectacular field stations, we encounter scientific luminaries - including social scientists, neuroscientists, and psychologists - who provide new perspectives on how to make science itself more diverse, equitable, and open to all.

About Elenora van Rijsingen
Elenora van Rijsingen is a postdoctoral researcher at the Department of Geosciences of ENS since 2019. Before this, she obtained her PhD at the universities of Roma Tre and Montpellier within a Marie Curie Innovative Training Network. In her research, she combines geological and geophysical observations with seismotectonic models to study earthquakes along active plate boundaries. Elenora has a strong motivation to contribute to more diverse and inclusive scientific communities. Besides the Equality and Diversity group at ENS, she is also part of the European Geosciences Union (EGU) committee for Equality, Diversity and Inclusion (EDI).

About Tahnée Engelen
Tahnée Engelen is a postdoctoral researcher at the Cognitive Sciences department since 2018. Before moving to Paris, she completed her PhD at the university of Maastricht in the Netherlands. Her research focuses on brain-body interactions, and more specifically she investigates how neural responses to heartbeats shape our subjective experience. Besides being a part of the new diversity initiative of the ENS, she is also a member of the Equality & Diversity committee of Cognitive Sciences department.

In French universities, women represent:
30% of research directors
25% of teachers
17% of deans
but
61% of non-teaching staff