Neuroplasticity, and the search for better vision

Claudia Lunghi, a researcher in the Laboratoire des Systèmes Perceptifs at ENS-PSL, has secured a European Research Council grant to examine how the brain adapts to sensory impairment. The basic research of the HOPLA project could lead to innovative therapies for patients suffering from impaired vision. 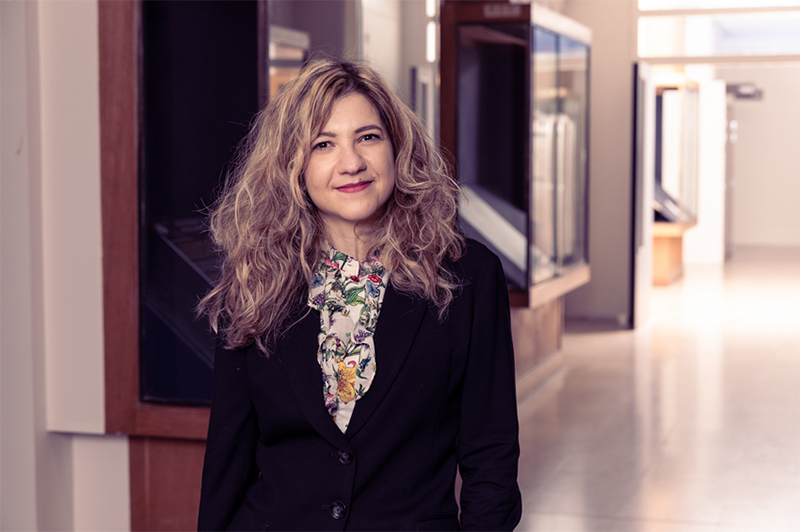 Arguably the most important organ in the human body, the brain is also the biggest keeper of secrets from medical science. However, a team at ENS-PSL led by Claudia Lunghi will soon be launching a project to uncover some of those secrets, as they explore the brain’s ability to adapt to sensory loss, and sight in particular. A five-year ERC starting grant has been awarded to advance our knowledge in the area, potentially leading to new treatments and a better quality of life for people with sensory impairments.

The complexity of sight

Born in Aosta, in Italy’s part of Mont Blanc, Claudia says she “grew up in a little town in the Alps, like Heidi.” In sharp contrast, her university education was in Milan at the Vita-Salute San Raffaele, with her interest in neuroscience being aroused during a philosophy degree. This soon led to a Masters in cognitive neuroscience at the same university under Prof. Maria Concetta Morrone, who introduced her to the study of visual perception. “We wake up in the morning and see the world, and we take it for granted,” Claudia says. “But I found it fascinating to learn how complicated, and incredibly amazing, are the computational levels, the circuitry, and the physiology of visual perception.”

Her scientific focus has been on neuroplasticity, a fundamental property of the brain. “Neuroplasticity is the brain’s ability to change its function or structure in response to any kind of environmental pressure,” Claudia explains. “It underlies our learning, memory, cognition and, in early life, the fine-tuning of our sensory systems. I’m studying vision in particular, where the classical view is that plasticity reaches a peak in a temporal window called the ‘critical period’, during childhood, and is not retained in adulthood.”

Conventional wisdom could be wrong

The implications here are two-fold – that even brief interruptions of sensory development in childhood will have a lifelong impact, and that the effects of injury or diseases on our senses cannot be reversed during adulthood, even partially. Clearly, certain parts of the nervous system – notably, the so-called ‘higher cortices’ that handle learning, cognition and memory – do retain some plasticity in middle and old age. We can still develop new skills, use new software and learn a new language, for example. However, the dramatic reduction of plasticity in the ‘lower cortices’ of the brain, which handle the initial processing of sensory inputs such as vision, has long been a widely-held belief among neuroscientists.
Not anymore.

Today, scientists are becoming increasingly skeptical about that classical view, and Claudia’s work as a CNRS researcher at ENS could help to turn conventional wisdom on its head. “There is growing evidence that the visual cortex might retain some degree of plasticity, even in adulthood, and that this level of plasticity could be exploited and even boosted to promote the recovery of visual function, for example, after certain vision diseases or sensory loss due to injury,” she reveals. Her own contribution has been to open up a new avenue of research after what she described as “an experiment that seemed like a crazy idea, and results that seemed counter-intuitive.”

The gold standard for assessing visual plasticity in animals is monocular deprivation, a technique developed by David Hubel and Torsten Wiesel, and for which they won a Nobel Prize. What gets measured is the ‘shift of ocular dominance’ which occurs after one eye is deprived of visual information, and leads all the neurons in the primary visual cortex to be rearranged, so that they respond to the open eye. Claudia’s ‘crazy idea’ during her PhD was to use a psychophysical technique known as ‘binocular rivalry’ to test the impact of short-term monocular deprivation on ocular dominance in humans, even though the overwhelming weight of scientific thinking suggested this was pointless. Then came the counter-intuitive results. “What we found was that actually in adult humans, after a couple of hours of monocular deprivation, ocular dominance shifted to the eye that was deprived, which is exactly the opposite of what is observed during development,” she recalls. “The result was hard to believe, and went against decades of scientific literature.”

Since then, Claudia’s focus has been on trying to understand the neural mechanisms behind this visual plasticity, and to look for ways of boosting it, so that visual functions in adults might one day be recovered after diseases that were thought to be untreatable. Her work will move to a new level with the launch in May of her HOPLA project, courtesy of the ERC grant. In more detail, the five-year project is divided into four different work packages:

- The relationship between Hebbian and homeostatic plasticity
In the 1940s, Canadian psychologist Donald Hebb suggested that a repeated excitation of neighboring neurons strengthened the synapses between them, a theory summed up as ‘cells that fire together, wire together.’ Homeostatic plasticity is the brain’s bid to return neurons and synapses to their original state, so that neuronal activity does not reach saturation point. In monocular deprivation, homeostatic plasticity aims to compensate for the short-term loss, while Hebbian plasticity is responsible for the excitation or depression effects of the deprivation. We know that both forms of plasticity are occurring at the same time, but how exactly do they interact? A HOPLA experiment involving perceptual learning and monocular deprivation could provide some of the answers.

- The role of excitation/inhibition balance in homeostatic plasticity
The aim here is not only to look deeper into the mechanisms of homeostatic plasticity, but also to see how it could be consolidated and enhanced in adults. A key feature of homeostatic plasticity is the balance between two driving forces in the brain, the chemical neurotransmitters for excitation and inhibition. “We believe that inhibitors act as a brake on plasticity,” Claudia says. “If we could release it -- and studies have shown that physical exercise can reduce the inhibition of the visual cortex -- we could reopen a ‘critical period’ in adults. With HOPLA, I want to measure the concentration of the inhibitory neurotransmitter in the primary visual cortex using Magnetic Resonance Imaging (MRI) spectroscopy when plasticity is either enhanced or consolidated.”

- New forms of visual and auditory homeostatic plasticity
Advances in technology are leading to new experiments in many areas. For visual plasticity in adults, HOPLA’s experiments will be carried out using Virtual Reality headsets for a two-hour deprivation not just of one eye, but of one visual hemifield, i.e. left or right. The aim is to see if plasticity can occur in a single hemifield, which could have implications for the treatment of hemianopia, where illness or injury deprives the patient of sight on one side. While much of HOPLA is dedicated to vision, the team will also investigate whether a similar form of compensatory homeostatic plasticity occurs in the auditory system.

- The interplay between neuroplasticity in different senses
HOPLA’s final work package will look at ‘cross-modal plasticity,’ or how our brains react to a permanent sensory loss by exploiting the unused cortex. It is already known, for example, that the visual cortex of an early-blind person is appropriated by other senses, such as hearing or touch. HOPLA will venture into unknown territory by investigating the interplay between cross-modal and single-sense plasticity. In practice, this means testing the plasticity potential of the visual cortex of deaf subjects, and then relating that to their level of cross-modal plasticity. Their performance in these tests can then be compared to the results of non-deaf subjects, and with subjects who have had aural implants.

Hope for a better quality of life

Ultimately, Claudia and her team hope their basic research will lead to a better understanding of sensory neuroplasticity, so that clinicians and pharmaceutical researchers can develop therapies to improve people’s quality of life. While the prospects for HOPLA are exciting, a year of pandemic has put them firmly on hold. Health restrictions have inevitably delayed a project that is heavily dependent on experiments with human volunteers, with plans to recruit a research team being temporarily shelved. “It’s been a tough year, and not just for me,” Claudia admits. “About 90% of our research has been blocked for health reasons, so I’m looking forward to starting in May, and to building a new team.”

At an organizational level, the team will join the Laboratoire des Systèmes Perceptifs within the Département d'Études Cognitives at ENS. “Scientifically, it’s an amazing environment to work in,” says Claudia. “The department gathers experts from different aspects of cognitive science, from philosophy to linguistics, and computational neuroscience to physiology. This collaborative, multidisciplinary approach is really stimulating. It’s the perfect place for new ideas.”