Shining a light on dark matter

With Nick Kaiser and Niall Jeffrey, cosmologists at ENS-PSL

Professor Nick Kaiser and researcher Dr. Niall Jeffrey represent two different generations of cosmologists at ENS-PSL. However, they share a common aim in helping to reveal the secrets of dark matter and dark energy, the two main constituents of the universe. 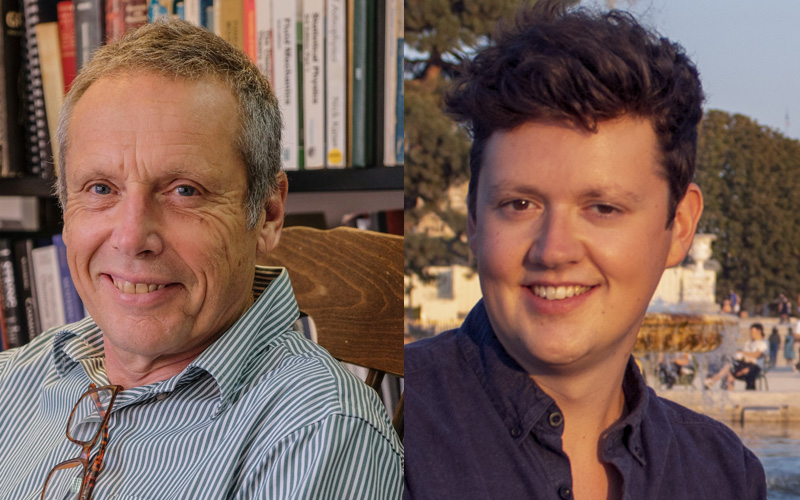 For thousands of years, people have gazed up at the night sky and wondered about the nature of the universe, and what makes it tick. While cosmology and astrophysics have used Einstein’s Theory of General Relativity to provide many of the answers, recent discoveries have also raised new questions about our understanding of the universe. Today, the work of scientists at ENS is helping to advance our knowledge of so-called ‘dark matter’ and ‘dark energy’, and thereby provide an answer to one of the most tantalizing questions in science: ‘When it comes to gravity, could Einstein have got it wrong?’

The latest advance was the recent publication of the largest ever map of dark matter, courtesy of a team co-led by Dr. Niall Jeffrey, researcher at ENS-PSL. The map, which draws on observations of over 100 million galaxies, is part of the international Dark Energy Survey, a collective effort involving more than 400 scientists. Along with the observations of a quarter of the southern hemisphere skies, the map was produced by using ‘gravitational lensing’, a natural phenomenon now synonymous with one of the world’s leading cosmologists, Professor Nick Kaiser of ENS. 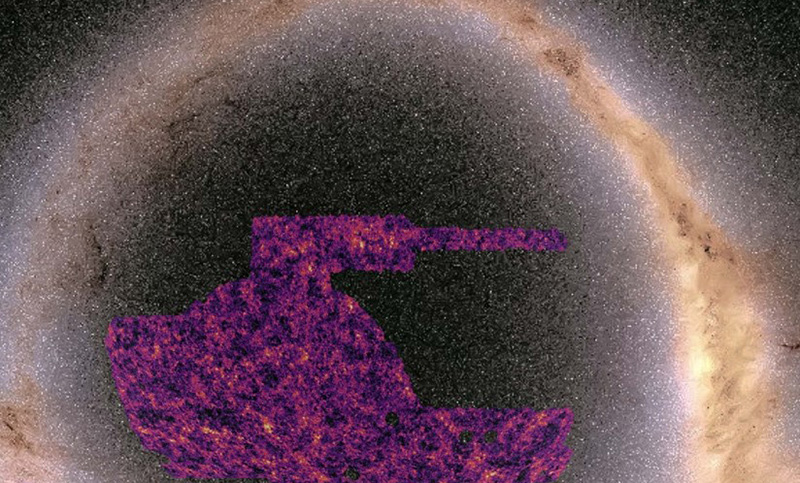 The pulling power of dark matter

“Light is deflected by mass, so if you fire a photon past the Sun, it will get deflected,” explains Prof. Kaiser. “We live in a universe where galaxies are clustered, so when we look at distant objects, we’re looking at them with a varying refractive index. It’s like mirages in the desert – the light from the object you are looking is getting deflected on the way. In cosmology, we see similar sorts of optical mirages.” That deflection of light from distant galaxies is produced by the gravitational pull of ‘dark matter’, whose existence was proposed by Swiss astronomer Fritz Zwicky in the 1930s and whose exact nature remains unknown. Not surprisingly, there is a correlation between the two -- the greater the amount of light distortion by clusters of galaxies, the more dark matter must be present. And from there, you can start to create a map.

Inspired by ground-breaking research in the field by US scientist Tony Tyson, Prof. Kaiser’s work has been to further develop the measurement of galaxy clusters and dark matter. “My generation of cosmologists was motivated to test a specific theory,” he says. “We didn’t just want to have a nice image of something, we wanted to be able to do statistical studies… We wanted to provide a meeting point between the theory that predicts something and the observations. And making that precise, was where I came into the game.”

The advances made by Prof. Kaiser and others laid foundations for today’s multinational survey, which aims to test our understanding of the cosmos. Dark energy is the name given to the repelling gravitational force that scientists believe is responsible for the accelerating expansion of the universe – a fact confirmed in 1998. It accounts for 70% of the universe, with a further 25% being dark matter, and the remaining 5% being other matter. The DES seeks to probe the nature of dark energy, which is currently a mystery,  and to see whether its existence can be squared with Einstein’s theory - or if a new theory of gravity is needed.

The work by Jeffrey’s team has taken mapping of dark matter to a completely new level and is making a vital contribution to that probe. “Firstly, the map tells you about the nature of dark matter, which is otherwise invisible,” he explains. “You can see the interaction of where galaxies live within the scaffolding of the universe, the Cosmic Web, and that can tell you something about how dark matter forms into the Cosmic Web, and how galaxies are living, growing and moving within this matter. Secondly, the distribution of dark matter tells you about the history of how the universe has evolved. The structures you see in the map – how strongly they appear, how far apart they are distributed, and the size of the cosmic voids between them – are all observed at different distances from us. And because light from more distant galaxies has taken more time to reach us, we’re actually seeing that dark matter as it was billions of years ago. So, we are getting a snapshot of the universe at different times, which also tells us about how it is expanding.”

With millions of galaxies being photographed over a three-year period, the task of cataloguing their structures and shapes appears a Herculean one. Fortunately, Artificial Intelligence, and more specifically Machine Learning, is providing a helping hand. “Even with the highest-resolution images of the night sky, when you’re observing a galaxy that is 7 billion light years away, it’s not the clearest picture,” Jeffrey admits. “You want to resolve questions like ‘Is this blob on your photograph a star or a galaxy?’, ‘How far away is it?’ and ‘What shape is it?’ And that’s where Machine Learning helps.”

The publication of the map made headlines not only because of its sheer scale and detail, but also because of a possible discrepancy in cosmology that could mean a problem with Einstein’s theory of relativity. “Though the data overall seems to agree, there are a few hints that the theory might need tweaking,” Jeffrey says. “From our results and those of other lensing experiments – you can see that the universe is perhaps ‘smoother’ than we would have expected. Gravity has pulled the dark matter into fewer peaks and created less empty voids. It’s not statistically significant, which is why it’s only a hint, but some people believe that it could be the chink in the theory’s armor. And any scientist would be excited about proving that Einstein is wrong. Because if you could change gravity, you could more easily explain dark energy and might be able to make it fit the Standard Model of physics.”

The prospect of finding a fatal flaw in the central pillar of astrophysics is certainly a tantalizing one. For his part, Prof. Kaiser is excited by the idea, but circumspect about the imminent demise of a theory that has proved its worth and resilience for over 100 years. “Many of us are hoping that a new theory of gravity will come along, and we’d like Einstein to be wrong,” he admitted. “But sadly, he’s holding up pretty well…”

More results from the survey will be revealed in due course, as only half the data gathered so far has been analyzed. For both scientists, the one certainty is that they are in the right place to make progress. Along with ENS’ own resources, the close proximity to the Institute for Astrophysics makes Paris an ideal city for their work. “ENS has an extremely strong high energy physics and astrophysics groups, so cosmology fits nicely between those two communities,” says Prof. Kaiser. “It means we have very good students and can attract extremely strong post docs, like Niall Jeffrey, to come and work here.” For his part, Jeffrey highlights the cross-discipline exchange of ideas that is promoted within the different communities at ENS. “Before lockdown, we could wander into each other’s offices and talk about strange problems in cosmology, scribble equations on a whiteboard, and then someone else would come past and join in,” he recalls. “And I’m looking forward to doing that again.”