A Round-table discussion: The political economy effects of low oil prices in the Middle East

Between 2014 and 2016, Middle Eastern oil-exporting countries’ revenues fell by an average of more than one-third – or 15% of GDP – and their current-account surpluses have swung violently to double-digit deficits. Notwithstanding a small recent uptick, most forecasts predict that oil prices will remain at current levels for the long term. If so, this will deliver a macroeconomic shock of historic proportions and profoundly change the Middle East.

Most oil-producing countries have already started to cut expenditures, borrow, and draw down their reserves. But countries with large external imbalances, low reserves, or high debts will increasingly feel financially constrained, if they don’t already. Cuts in spending will unbalance the current social contract, as will attempts to reform the economy to make it more productive and diversified.

Ultimately, each country’s economic fate will depend on the choices that it makes today. It is hard to predict what a future of low oil revenues will mean for the Middle East. Countries’ elites can either embrace change, or do nothing and risk a precipitous decline.

The round table brings together prominent regional analysts to discuss how these shock waves are playing out in different parts of the region, the challenges facing decision-makers, and which policies they are likely to chose among the stark choices they face, both economic, and political.

Bernard Haykel, Princeton: The political challenges in the GCC – what political changes are necessary for a more productive social contract?

El Mouhoub Mouhoud, Dauphine: The challenges in the middle oil producers – the case of Algeria 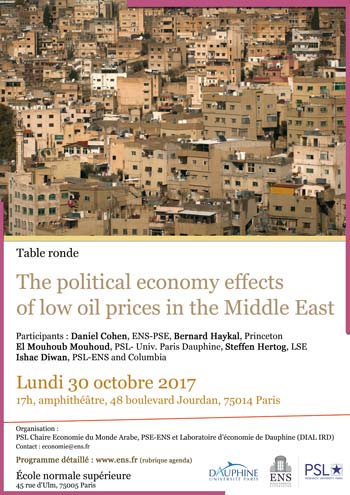