Our chemistry department has welcomed a new junior professor to its ranks, Kong Ooi Tan, a specialist in Nuclear Magnetic Resonance (NMR). After Imperial College, ETH Zurich and MIT, this much-traveled academic has joined ENS-PSL to break new ground in his field. 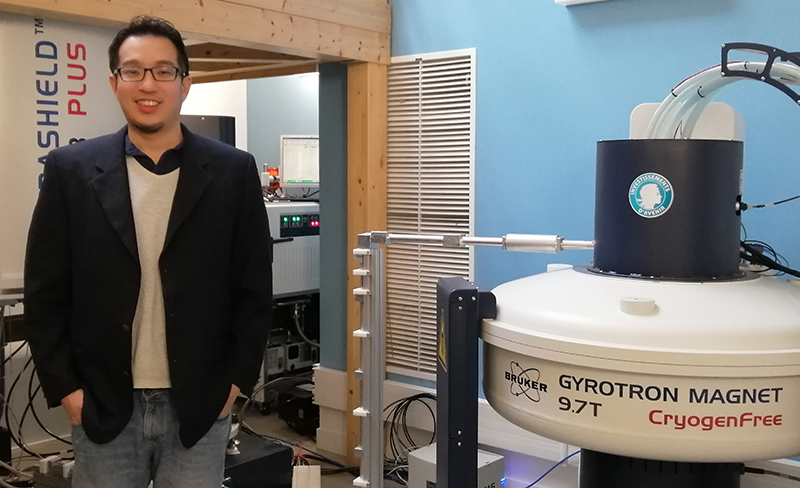 From MRI scans that look inside the human body, to spectroscopy that reveals the molecular structure of viruses or materials, the ability to see the world at an atomic level of resolution has certainly brought many benefits. Even so, the technology behind these advances, Nuclear Magnetic Resonance (NMR), has a lot more to give. If its sensitivity, and therefore processing speed, can be enhanced, it could herald major new breakthroughs in healthcare and material science. And a new member of faculty at ENS-PSL, junior professor Kong Ooi Tan, is determined to help deliver on that promise.

Kong was born and raised in Malaysia of Chinese heritage, one of the country’s three ethnic communities, along with Malay and Indian. “We take pride in being a multi-ethnic nation,” he says. “It makes you open-minded and able to integrate into different environments, which has helped me a lot. I grew up speaking several languages – Malaysian, English and three Chinese dialects – and being exposed to both oriental and western cultures.”

Along with a talent for mathematics and physics, attending a school that offered the British curriculum helped him start his academic career by winning a place at Imperial College, London to study physics. His four years there yielded a degree, an MSci and a sporting passion: skiing. “I joined the university’s Malaysian Society, which had a tradition of arranging a week-long ski trip to France during the Christmas break,” he recalls. “For many of us, the trip to Les Arcs or La Plagne was the first time we had seen snow.”

To help him choose his future PhD subject, Kong took a variety of summer internships in Germany and Ireland, starting with condensed matter physics. “It is very theoretical, and most of the time you are just sitting in front of a computer writing codes and simulations,” he says. “I also tried particle physics, but it was the same thing -- lots of coding, and I realized that pure physics wasn’t my cup of tea. I wanted practical, hands-on experience. So, I decided to do my Masters in plasma physics -- building a laser interferometer - which was actually the other extreme! I spent a lot of hours in a very dark room, working out alignments by trial and error. I felt more like a technician than a scientist.”

Unsure of which road to take, it was time to gamble. As a topic midway between the theoretical and practical, Kong rolled the dice in favor of NMR, despite having no real experience of the subject and being qualified in the wrong field, as NMR is is usually considered as a subject in chemistry, not physics. His acceptance for a PhD by ETH Zurich, where two professors have won Nobel Prizes for NMR, was effectively a gamble for the Swiss institution too.

The power of multidisciplinary science

In truth, the bets were less risky than they seem. “When you talk to professors, you realize that many are involved in interdisciplinary science and that research is now about bringing people with different expertise together and brainstorming,” Kong points out. “It’s how a lot of scientific breakthroughs are achieved, and it’s an open secret of MIT’s success.” Kong discovered that secret in 2016, when he joined MIT as a post-doc researcher for Prof. Robert G. Griffin, devoting himself to a field that promises a scientific revolution in NMR applications from healthcare to material science.

NMR makes it possible to analyze the molecular structure of a chemical compound in a non-destructive way, i.e. not bombarding it with high-energy X-rays, which could destroy the sample after measurement, for example. The key piece of equipment is a superconducting magnet, usually tens of thousands of times stronger than the Earth’s magnetic field. Its role in compound analysis is based on the fact that -- just as every person has a unique fingerprint – every atom can be recognized by its unique reaction to a pulse of radiation in a strong magnetic-field environment.

The process starts by inserting a sample into the magnet, which causes the previously directionless nuclei to align and rotate - rather like spinning tops – in a movement known as precession. Nuclei in different conditions have different rotation frequencies, i.e. slower or faster, according to the surrounding chemical environment. Step two is to apply a radio-frequency (RF) pulse, whose frequency, if precisely matched to the rotation frequencies of the nuclei, will align their spins and send out RF signals that are picked up by a detection coil. That raw data is then converted into spectra -- which can be analyzed visually – to reveal the substance’s molecular structure.

The quest for greater sensitivity

At MIT, Kong developed expertise in a specific branch of NMR, Dynamic Nuclear Polarization, which he is now bringing to his work at ENS. A field with huge potential, DNP aims to increase the sensitivity of NMR experiments, so that information can be collected in a fraction of the usual time. “With DNP, what would take one year with conventional NMR techniques can be done in minutes, which means a saving in cost as well as time,” explains Kong. “In NMR, the sensitivity comes from how the spins of the nuclei interact with the magnetic field, because the stronger the interaction, the stronger the NMR signal will be. The novelty of NMR is that you exploit the polarization not of an atom’s nucleus, but a nearby electron, which produces a much stronger signal – that is subsequently transferred to the proton.”

To continue his work, the limited opportunities in the US for fundamental science made it almost inevitable that Kong’s next move would be back to Europe. By becoming an emeritus professor at ENS of Prof. Geoffrey Bodenhausen, a world-renowned expert on DNP, created just the vacancy he needed.

Few people leave a five-year post-doc at MIT more than a year early, but the chance to join the team at rue Lhomond and advance science through DNP was too good to miss. Kong’s reference to making the NMR signal ‘much stronger’ was an understatement as, in theory, DNP can amplify a signal 658 times. With current DNP instruments typically delivering ‘only’ a 10-fold improvement in signal strength, and a best case of 30, when analyzing proteins or materials in high magnetic fields, Kong believes that any scientist who can deliver significantly bigger numbers in a high magnetic field and at near room temperature could possibly be nominated for a Nobel Prize. “My research objective at ENS is to push the barrier beyond the current state of the art, and try to get as high as possible,” says Kong. “It would be game-changing to get 100 or 200 and that’s what I’m trying to do.”

Applications from Covid-19 to batterie

DNP-powered improvements in NMR would certainly bring changes. In material science, atomic-level insights could help to explain why battery recharging and catalytic converter performance deteriorate over time. In healthcare, they could reveal more about the structure of proteins that cause Alzheimer’s Disease, potentially leading to a cure, or that cause mutations in viruses, such as Covid-19. NMR is already used in clinics for MRI scans, with the signals from millions of sub-atomic particles combining to create a detailed image of the inside of the body. However, the scans last 15 to 90 minutes, which limits their application. “As the slightest movement causes blurring of an MRI image, you can’t have a scan of your lung, for example, because you can’t stop breathing,” Kong points out. “But if you could take an image of a lung in one second, wow! It would be revolutionary.”

For now, his focus is on developing instruments that scientists in other fields would use to make such breakthroughs. Along with his teaching role, he is part of an ENS research group, Laboratoire des BioMolécules (UMR7203 CNRS-ENS-SU), where different projects use shared resources, and where researchers, technicians and engineers are funded by the CNRS. Kong has nothing but praise for this research model à la française. “It’s great,” he says. “In places like the UK or MIT, the post-docs and PhDs have fixed-term contracts. So they leave, taking their knowledge with them, which can be a big problem. You don't have that here, as they are permanent staff, and a real asset.”

A diverse and international future

This environment, along with the support of other colleagues in the UMR 7203 team, is not the only reason why the School and its new junior professor are on the same wavelength. “ENS wants to become more diverse, to be more international, and to implement new programs – and I strongly believe in diversity and multidisciplinary science,” Kong explains. True to his word, his recruitment is certainly multidisciplinary. “My first hire is an electrical engineer who knows nothing about NMR or chemistry, or physics… But I’m working on instrumentation, and who is more experienced at building instruments than an electrical engineer?”

As he looks ahead, Kong is determined not only to move his discipline forward, but to repay the faith shown in him by ENS-PSL. “The School took a risk in hiring someone with my exotic background, not being from the EU or speaking French,” he says. “And that’s made me quite excited about what I can do here.”

You may also like
Tatiana Starikovskaya: Looking for patterns in a string